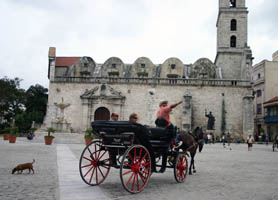 Catedral de San Cristóbal is by far the most prominent building on the Plaza de la Catedral. The Cathedral was built over the chapel after 1748 under instructions from the bishop of Salamanca Spain, Jose Felipe de Trespalacios. Considered by many as one of the most beautiful and sober churches of the American baroque period.